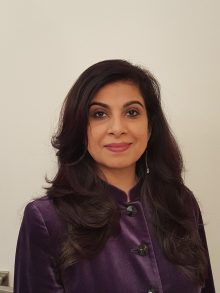 Dr. Fahmida Suleman, ROM Curator of Islamic Art & Culture, is responsible for developing and implementing strategy to build, manage and interpret the ROM’s world-class collection of Islamic art and material culture, which represents the largest collection of its kind in Canada.

Fahmida’s role includes leading strategic acquisitions, developing public programs and exhibitions, and further engaging the Islamic community in Toronto and across Canada.  Fahmida joined the ROM from the British Museum where she was Phyllis Bishop Curator for the Modern Middle East. In that position, Fahmida was responsible for the Museum’s collection of ethnographic objects and textiles from the Middle East and Central Asia. Previously, Fahmida has also been a consultant with the Aga Khan Trust for Culture during the development phase of the Aga Khan Museum.

Raised in Toronto, Fahmida holds a degree in Islamic and Religious Studies from the University of Toronto, and Masters and Doctoral degrees in Islamic Art and Archaeology from Oxford University. She completed the Graduate Programme in Islamic Studies and Humanities at the Institute of Ismaili Studies in London, UK.

Dr. Suleman is joining the ROM at a dynamic time as the Museum charts a new course for the future, developing and delivering relevant and high-impact programs and exhibitions in art, culture and nature to audiences at home and around the world. She will begin her role at the Museum in January 2019.