Registration for this free event is required. Click on the "Register" button at the top of this page.

In the early nineteenth century, John Colthurst, an Anglo-Irish special magistrate in St. Vincent, described the public humiliation of an enslaved black woman named Dutchess in his journal. Ordered to report to the local courthouse for the alleged crime of stealing money, Dutchess was ridiculed for the nature of the fine “wearing apparel” which she had purchased including “two pairs of pink satin shoes”; clothing which the local whites deemed to be incongruous with her racial, sex, and gender identity. This lecture pursues a comparative exploration of slave dress, cultural preservation, and self-determination in Canada and British Caribbean islands like Jamaica and St. Vincent. Recuperating the histories of three enslaved black women named Dutchess, Florimell, and Cash, and one enslaved black man named Andrew, it explores how they acquired the means and materials to adorn, protect, and beautify their bodies in the midst of endemic material deprivation, cultural prohibitions, economic disenfranchisement, and pervasive physical violence. Drawing upon Rebecca Earle’s concept of “clothing acts,” the lecture examines genre studies, portraiture, and fugitive slave advertisements to explore the spaces between the imposition of cloth rations in tropical planation regimes like Jamaica, the use of European second-hand clothing in Canada, and the preservation of African cultural dress practices like headwrapping across the Americas.

Charmaine A. Nelson is a Professor of Art History and a Tier I Canada Research Chair in Transatlantic Black Diasporic Art and Community Engagement at NSCAD University in Halifax, Nova Scotia. She is also the founding director of the first ever institute focused on the study of Canadian Slavery. She has also taught at McGill University (2003-2020) and Western University (2001-2003). Nelson has made ground-breaking contributions to the fields of the Visual Culture of Slavery, Race and Representation, and Black Canadian Studies. To date she has published 7 books including The Color of Stone: Sculpting the Black Female Subject in Nineteenth-Century America (2007), Slavery, Geography, and Empire in Nineteenth-Century Marine Landscapes of Montreal and Jamaica (2016), and Towards an African Canadian Art History: Art, Memory, and Resistance (2018), the first book to consolidate the field of African Canadian Art History. Nelson has given over 240 lectures, papers, and talks across Canada, and the USA, and in Mexico, Denmark, Germany, Italy, Norway, Spain, the UK, Central America, and the Caribbean. She is also actively engaged with lay audiences through her media work including ABC, CBC, CTV, BBC One, and PBS. She blogs for the Huffington Post Canada and writes for The Walrus. Nelson has held several prestigious fellowships and appointments including a Caird Senior Research Fellowship, National Maritime Museum, Greenwich, UK (2007) and a Fulbright Visiting Research Chair, University of California – Santa Barbara (2010). Most recently, she was the William Lyon Mackenzie King Visiting Professor of Canadian Studies at Harvard University (2017-2018). She was the first black woman and the second art historian to hold this position. 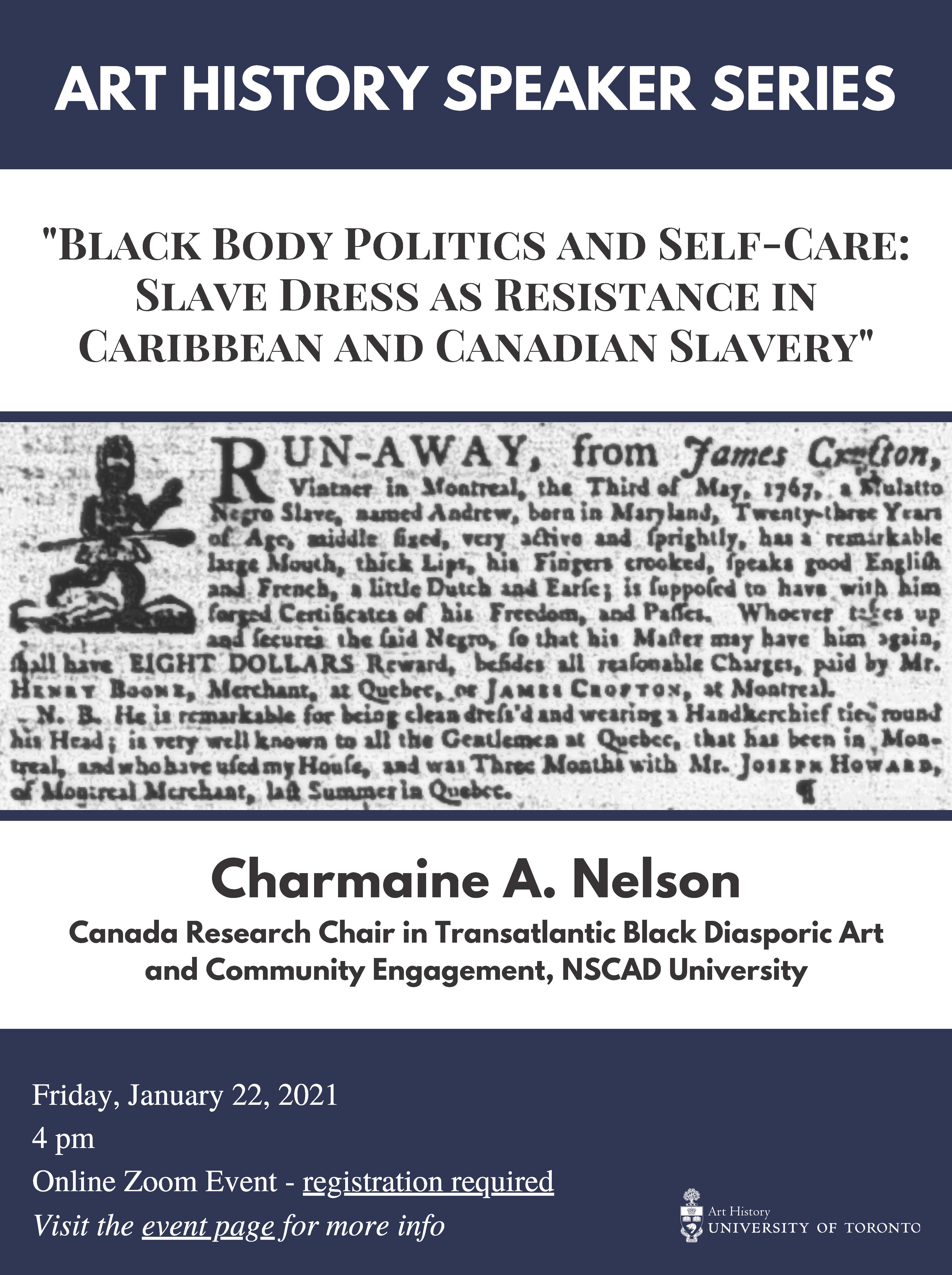